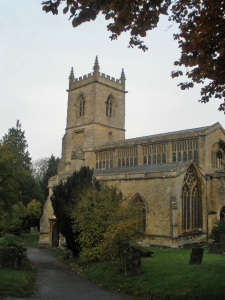 For all you history buffs, the latest edition of BBC History magazine (December 2010) contains a piece on St Mary’s Church in Chippy as part of a feature on the Prayer Book Rebellion.

Henry Joyce, vicar of St Mary’s in the 1540s, was one of the rebels who objected to the introduction of the English language Book of Common Prayer in 1549 (previous prayer books and services had been written and conducted in Latin).

At the same time, the government also ordered that inventories of church possessions be drawn up, leading to concerns that property would be confiscated.

Henry Joyce rebelled against these moves, and encouraged others in Oxfordshire to do the same. However, the Oxfordshire rebellion was quashed, and Joyce met a grim fate – hung in chains from the tower of St Mary’s as a warning to others.

The BBC History feature looks at nine places associated with the Prayer Book Rebellion. St Mary’s is at number six – the photo of our beautiful church at odds with the gory story detailed above it.